Hello Spurs folk, the eyes are getting better, just woke up one morning and could instantly feel an improvement.
It isn't as easy as it sounds spending a lot of time in bed during the day and at night, but a couple of days of it did the trick.
I must be careful not to overdo it no and start it all over again. The next problem point will be when the heating is turned on.
Thank you for the well wishes everyone.
Right onto Spurs.

The Tottenham Hotspur Stadium hosts a conference on 18 October with several Government departments and major international brands, just another example of the club generating money for football, away from football, indeed away from sport.
Being a self sustainable elite club is so much better than being a Sugar Daddies plaything, which hasn't worked for Everton, Aston Villa (twice) and others.

Anyone who has had a thigh injury knows it can take anything from a eek or possibly two weeks for a minor pull to a month or more for a tear.
At this stage I'm expecting Hugo Lloris to be back in action for the Arsenal game, having pulled out of the French squad for their upcoming two internationals.
Fraser Forster is an able deputy, a former England international who seems more mobile than Joe Hart who clearly has lost the spring in his legs despite being fit.
It affects us all at different times, Peter Shilton and Davis Seaman were both older when it hit them, but they were still picked for England, which ultimately cost us in two world cups.
Hugo Lloris, by the way, is 3rd in the goalkeeper progression stats (52.36m) behind Ederson (Man City) 66.3m and Alisson 54.38m.
Aston Villa 4th 46.74 and Arsenal 4th from bottom with only 9.7m meaning they pass short a lot to retain possession and build from the back.
I have studied Leicester City's first goal again and it starts with a poor clearance from Davinson Sánchez that gives the ball to the opposition in our half.
The ball is played wide where he is played around and has to chase back, rashly dives into a challenge that he tries to pull out of but fails.
Yes their player dived, of course he did, but every player would when an opponent goes into their foot inside the penalty area.
Mental improvement is there is some, but in others it isn't and the Colombian centre-back still has a lot of work to do to control his anxiety on the pitch.
He has the skill, but his anxiety gets the better of him too often.
Conte didn't trust him to play 90 minutes this time, bringing on Romero when Sánchez didn't need a rest.
That was rather telling.
Daniel Levy needs to tie down Antonio Conte to a longer term contract, particularly with Juventus suffering another defeat, now sitting 8th in Serie A, 7 points behind the surprise leaders Udinese, whom Destiny Udogie plays for.
Juventus are sure to want him, indeed it is already being suggested in Italy that he takes over in the summer when his Tottenham contract expires.
Now for all of you about to moan, the length of contract Conte has at Tottenham is down to Conte himself, it is what he insisted upon.
Massimiliano Allegri has a contract for a further two years at €7m net plus €2m bonuses a year.
Roberto De Zerbi has been mentioned but he has now joined Brighton & Hove Albion, while Zinidine Zidane turned down €20m from PSG as he wants the French national job, when it becomes available.
A situation to keep an eye on.

Right, let's throw something new at you.
In footballing statistical terms 'x' stands for 'expected' thus xG = expected goals.
A statistic Liverpool use in their scouting and player assessment, I don't know if Tottenham do for certain but I'm sure we do, is xT, expected threat.
I was looking at this and the expected non-crossing threat which led me to calculate the Expected Crossing Threat and it threw up interesting stats as purs already had two players high up in the Expected Threat stats, Dejan Kulusevski and Ivan Perišić. 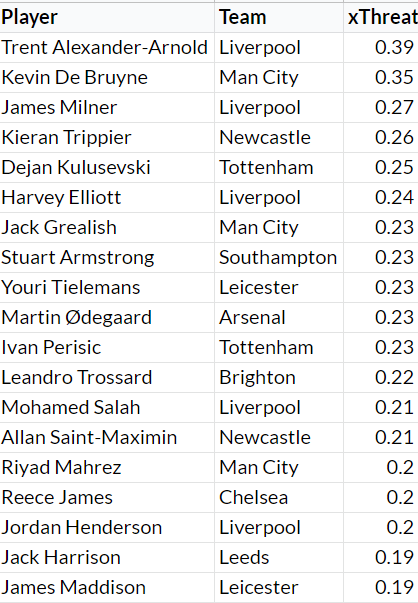 Expected Crossing Threat
1.  Kevin De Bruyne (Man City) 0.17
2.  Trent Alexander-Arnold (Liverpool) 0.16
3.  Dejan Kulusevski (Spurs) 0.12
3.  Richarlison (Spurs) 0.12
3.  Leandro Trossard (Brighton) 0.12
6.  Ivan Perišić (Spurs) 0.11
6.  Reece James (Chelsea) 0.11
8.  Kieran Trippier (Newcastle Utd) 0.10
8.  Rayan Aït-Nouri (Wolves) 0.10
8.  Neco Williams (Nottingham Forest) 0.10
8.  James Ward-Prowse (Southampton) 0.10
12. Aaron Creswell (West Ham) 0.09
12. Romain Perraud (Southampton) 0.09
14. Allan Saint-Maximin (Newcastle Utd) 0.08
14. Jack Harrison (Leeds Utd) 0.08
14. Lucas Digne (Aston Villa) 0.08
14. Raheem Sterling (Chelsea) 0.08
18. Diogo Dalot (Man Utd) 0.07
18. Harvey Elliott (Liverpool) 0.07
Those figures show the threat Spurs carry from crossing from wide areas, as we once again saw verses Leicester City when Dejan Kulusevski crossed for Harry Kane to head home.
Tottenham are leading the Premier League for headed goals I believe, although I haven't checked that statistic before writing this.
If only our fickle fans hadn't helped to hound Kieran Trippier out of the club.
Perhaps those stats explain Spurs interest in Jack Harrison, whom our knowledgeable supporters say is rubbish!
You'll note there isn't an Arsenal player mentioned there, our next opponents, suggesting the Gunners are not a great threat from crosses.
Does this mean Clément Lenglet might start ahead of Ben Davies, being better on the ground and perhaps more mobile, although Davies has the London Derby experience under his belt?
Just to continue with those 'expected' statistics for you, a list for you to peruse and form your own judgements. 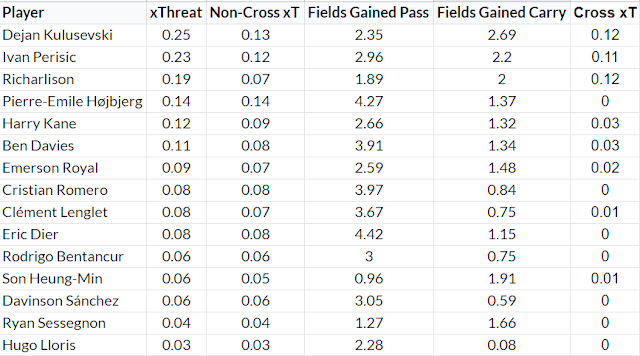 Please do remember stats aren't the be all and end all, circumstance, coach instruction etc need to be taken into account, but they can be fun to mess with.
Let's leave it there for today and return to resting the eyes.
1,007 words
COYS
FURTHER READING
Sporting and Leicester City - 2,088 words
Discusses the Sporting and Leicester City games but also contains the adjusted Premier League table for the expected Top 6 taking into account the strength of the opposition played.
VAR, Udogie, Marseille and Tottenham Transfer Talk - 1,444 words
This article asks Is VAR just a marketing tool and looks at the tactics of Marseilles head coach Igor Tudor..

Popular posts from this blog

Spurs, the richest club in the world in 2 years

By THBlogNews January 29, 2022
Spurs, the richest club in the world in 2 years A couple of things to chat about today. Firstly, the Premier League still have not said whether the people who made the decision to help Arsenal out by cancelling a game when they only had 1 Covid case, had Arsenal associations. They refused to answer that in their first reply to my complaint, that took two emails to get a response, despite asking for confirmation of receipt. I sent off a third email again asking the names of the people who made the decision and whether they had Arsenal connections. No reply received to date. Then of course we had the Chelsea 'gas' tweet during our game with them. This is totally unacceptable. You can't ask us to stop using the Yid word if you allow a club, not a fan, an official Chelsea club social media account,  How can you tell fans not to make gas references (which are reminders of the Jews being exterminated at death camps like Auschwitz) if you allow a club to do so without taking any d
7 comments
Read More >>

By THBlogNews July 03, 2022
Good morning and it's another spiffing day to be a proper positive Spurs fan during this exciting period of our carefully and meticulously planned evolution under Daniel Levy and ENIC. To further your excitement I have the Spurs Summer Transfer Window Day 24 piece for you. I know, you can hardly contain yourself can you. The eternal question, will he get straight into the news or will be keep us waiting again with some brilliant in sight into life at and around Tottenham. I'm undecided on that one folks, as of yet there is no Spurs Chat piece here, but who knows something might occur and I'll come back to fill in the blank, take you off the main transfer route into a local route (railway terms). If you have topics you'd like me to talk about please leave them in the comments. They all go for moderation so I do read them all and post all the sensible ones, leaving out the odd abusive one from some Levy hating doss-house in Scotland. In the meantime I said I read all
Post a Comment
Read More >>

By THBlogNews January 01, 2022
Tottenham Transfer Talk and Young Serie A players Spurs are monitoring Happy New Year to one and all. Welcome to Tottenham Transfer Talk once again where today I'll bring a quick round up and list some youngsters you may not have heard we are tracking. Fabio Paratici will be heading to Italy, he is always popping back and forth, to conduct negotiations with a variety of Italian-based players. There are stories starting to circulate in Italy that if Juventus don't pick up form quickly that  22-year old (23 next August) Dutch international centre-back Matthijs De Ligt will start to look elsewhere. I am not sure how accurate they estimation that Antonio Conte wants to pay the whole £126.37m (€150m - US$169.79m - AUS$234.58m) release clause to get his signature. Readers all know  Dušan Vlahović has told us he will sign for Spurs in the summer because he wants to work with Antonio Conte but we will pursue an outside chance of signing him in January, highly likely it will be the su
Post a Comment
Read More >>